Skip to content
borebags > Australia > Eat in the street! Let’s make it pozible. 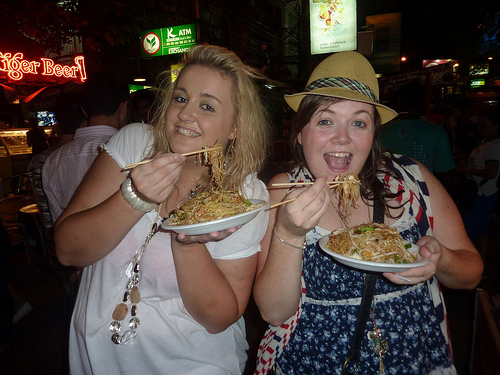 One of my favourite things about Asia is the food.

And anyone who has spent any time there will know the best place to eat – is on the street.

The pozibility of bringing this phenomena to Australia is pretty exciting.

When I first heard of the Street Food Australia (SFA) campaign, I immediately loved it . This social enterprise group have the aim to give less well-off migrants living in OZ  the opportunity to start up their own food business. Giving people the chance to bring their cultural cooking skills to the streets of Australia is something I can’t support enough.

The simple idea of giving street vendors a chance to build a business from using traditional cooking skills which could help kickstart a career in the food industry is just amazing. Beginning with the basics, the group are asking for donations to fund the first street vendor bike.

As in Asia, it doesn’t take much to start up a street stall but with the benefits and help from SFA and the possibilities of how this campaign can grow, the future of the street food scene in Australia looks good.

Bringing a taste of Asia to the streets of Brisbane would really boost the city’s reputation and provide a new way of socialising. Whip out a few plastic chairs, a radio and with some steamed dumplings, this could really be the new way to meet up with friends and catch up the latest news.

While living in Vietnam, I grew very fond of egg woman on my street corner in Saigon who I used to visit everyday for my omelette in a baguette. She used to know my order when she seen me driving up the lane and would start to get my omelette ready and even though she spoke little to no English, we had a little banter while she got my breakfast ready.

Even though I loved Vietnam, the best street food in SE Asia  is hands down in Thailand. A selection of anything you could dream of from your favourite Thai menu would be whipped up with fresh ingredients right in front of you. Some of the best Pad Thai was served up fresh in the middle of Khao San Road in Bangkok leaving many a tourist leaving with a filled belly and a smile on their face.

So let’s bring it a little closer to home by supporting this wonderful initiative!

One thought on “Eat in the street! Let’s make it pozible.”