Skip to content
borebags > Australia > Who ya gonna call? – TOADBUSTERS! 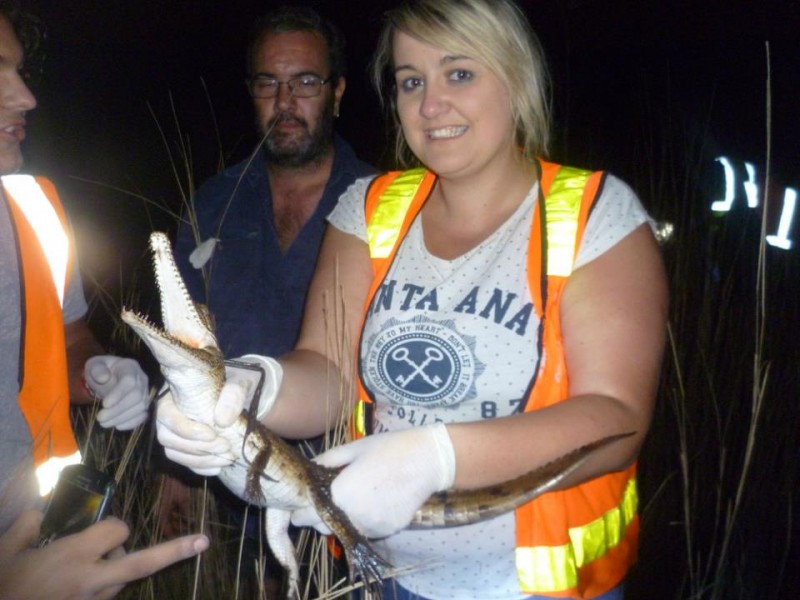 Becoming a yes man/woman is part of a series of posts that will take a look at some of the things that we have said ‘YES’ to that we would normally have said ‘NO’.

There aren’t many ghosts floating around Kununurra but you can be guaranteed to see a few cane toads knocking about that’s for sure.

With these creatures spreading over the Northern Territory into Western Australia like wildfire, someone had to step up to the plate and try to fix the problem.

Cue the Kimberley Toadbusters – a group of volunteers who venture out every night scouring the waterways of the surrounding area busting some toad tush.

And by signing up to help the KTB was when I turned into a YES woman. To even consider going out into the bush at night trying to pick up these creatures would have never have been on my radar. But it’s an experience I’ll never forget.

Before setting off to Kununurra to do my regional work, I’d spent the majority of my time in Brisbane, Queensland and I’d heard a bit about the problem of the cane toad. Although to be honest, my only experience was watching my house mate hit them with a golf club over the garden fence onto the next door church and claiming a second plague was coming!

I’d heard a few stories about people seeing them in Upper Queensland (where they were first introduced to get rid of the sugar cane beetle) when they were doing their fruitpicking. Most backpackers just tramped on them as they hopped past. I don’t know what scared me more, coming across a field of toads or the actual fruitpicking itself (fast forward a few months and I discovered the fruit picking was a much more daunting experience than seeing a cane toad).

So when I got to Kununurra it was time to check out what all the fuss was with these little blighters. Gareth was already there volunteering with Kimberley Toadbusters when I arrived. I think he thought I’d not be able to handle it and declared on the first night that it’d be ok if I held the bag which they were put in and just try to lift a few.

On the first night, I jumped into the troupe, disappointed at only one person wearing a boiler suit. He didn’t even have a vacuum backpack and Bill Murray wasn’t to anywhere to be seen. This was going to be interesting.

My first thoughts were that no-one would believe I was actually going into the outback to catch toads. I could picture my friends faces when I told them, they would be in stitches laughing!

How was I gonna lift them was my next thought. I was given the ”Introduction to Toads 101′, a speech which highlighted the best way to catch the toadies, what to wear (protective gloves and a high-vis vest) and the obligatory warnings that you may get wet (from toad pee if you make it anxious).

I knew I was going to be a legend for this at home. I knew it was going to spark more of a reaction than the bog standard fruit picking.

Most people think of me as a real city girl. And when I asked what a cow pat was, who could blame them? Although as the weeks progressed I became a KTB regular and was able to determine the difference between lots of animal shit!

I’m a bit of a clutz, not very graceful and I’ve got no balance whatsoever. So when you’re climbing rocks, hopping across rivers and sliding down mountains made out of jaggy stones, it takes a lot NOT to fall and break your neck.

And for anyone reading this who joined me out on a bust knows that I promised to write this blog, to commemorate all those ‘busting fails’ I had over the three months.

Of course, everyone’s main goal is to get the toad and doing whatever it takes to get every last toad – even if that means falling into a river face first, doesn’t it Kate? 😀

I’ve slid down mud hills, tripped over numerous rocks, stood in cow shit, been stabbed by HUNDREDS of thorny branches, had a rocket frog jump up one leg of my jeans, go across and come out the other leg, went arse down a mountain of rocks, got pissed on by a toad being passed through the car window, hit up the face by branches hanging off the side of the troupe and of course the infamous bogging overnight. I wasn’t the most elegant of busters, put it that way. But it was all part of the craic!

Over the months, we had some entertainment in and outside of the troupe with many newbies thinking we’d be heading down to Wolf Creek for the night, expecting an axe murderer to be standing in the headlights in the middle of nowhere just waiting for a car full of innocent backpackers.

Scaring new busters aside, we did try our best to get as many toads as we could each night. Although, there are a lot of toad shaped rocks out there I can tell ya that. Everyone mistakes a rock or a leaf for a toad at least once.

From picking up a Children’s Python to holding a baby crocodile at Lake Argyle, going out busting meant I was able to get to places that were off the beaten track and experience the real outback not sold in the tourist office. It was a great experience volunteering, doing my part to help the Australian ecosystem and something I’m glad I did.

Now I’ve left Kununurra I’m just waiting for the KTB merchandise to expand, with a Bobby Boiler Suit available in every colour for the future volunteers to bust in – I’ll be keeping an eye out for it don’t you worry.

For more information on what the KTB do – http://www.canetoads.com.au/