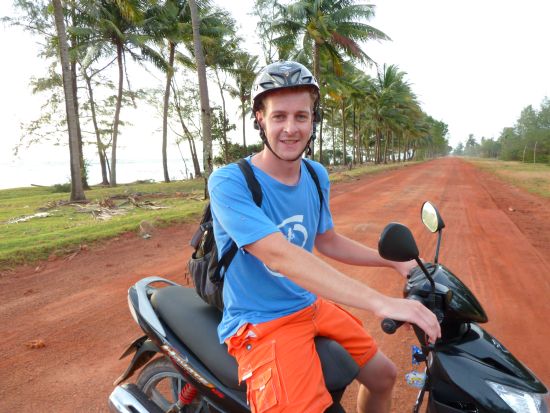 If you talk to anyone who’s visited Vietnam, one of the first things they will mention is the traffic (just type ‘Saigon traffic’  into YouTube and you’ll find countless videos). To say that traffic is mental would be a bit of an understatement. There are motorbikes everywhere, on the sidewalk, inside houses and on the roads. At first, looking at the traffic as a pedestrian is terrifying, with many first timers struggling to cross the road. This was exactly the reaction we had when we first arrived. We would not have even contemplated even trying to drive in it, but how times change. The longer we spent in the madness of it all the more normal it became to us. We were soon crossing the street without hesitation, sometimes without so much as a glance. During our first stint teaching English, we used Xe Om’s (motorbike taxis) to get us to and from work and happily put our lives in the hands of a local driver. Admittedly, when we returned to Vietnam for a few months to teach English again, I was still a little apprehensive at the possibility of driving a bike myself.

After spending a week on the island of Phu Quoc off the coast of southern Vietnam, we both rented motorbikes for the week to explore the Island. It was low season and the Island was very quiet with very little traffic. In short, it was the perfect place to get some motorbike practice in. Donna, who doesn’t even have a car license, had a bit of a shaky start but after a few hours she was motoring along nicely. The only problems she had was burnt knuckles and hands from gripping the handles so hard in the heat of the midday sun. After gaining some experience and confidence on Phu Quoc we both decided that we should try it for real in the city of 8 million bikes.

When we arrived back in Saigon it was hard to imagine ourselves sitting on a bike in the middle of all the traffic revving up waiting for the lights to turn green. From a pedestrian point of view it just looked like a chaotic mess of motorbikes all scrambling forward, weaving in an out and beeping at each other.

We decided that it was best to give it a go as soon as possible otherwise we’d never do it. We rented out 2 bikes for the afternoon and hit the road. After a couple of shaky laps around the block (District 1) we headed further a field and decided to try and navigate to places we usually take a moto-taxi to. First stop was out to Binh Thanh district to Star Fitness gym and the Manor Apartment complex. This proved pretty easy as it took you out the highway and the outskirts of the city. On the way back we headed out towards Binh Phu (District 6) where Donna worked. This also was easier than we thought.

Although the traffic looks crazy from a pedestrian perspective, when you’re driving in the middle of it all, it makes sense. There seem to be unwritten rules that everyone follows. As long as you worry about what’s in front, to the left and right, then you assume everyone else is doing the same. You do see accidents quite regularly but they are often little more than a minor incident because traffic doesn’t go fast at all. Most accidents are usually caused by stupidity, groups of people chatting while driving or people chatting on the phone while driving.

The test run went well and before we knew it we were biking all over the city, exploring and navigating Saigon like seasoned pros. It gave us a sense of freedom that we’d never experienced before in Saigon. Maintenance of the bikes was also a piece of cake as there was always an eager eyed Vietnamese guy around when something went wrong to point you in the right direction. After experiencing a flat tyre I was quickly pointed to the nearest street corner where, after a cold beer and a chat with the locals, the puncture was fixed. All for a grand total of about $3 (beer included).

Donna also experienced the similar Vietnamese hospitality or as some would like to call it – an eye to make a quick buck. She had driven to the gym on what appeared to be a dry morning. By the time she was leaving, a heavy storm had come in leaving the roads in knee length water. In an attempt to exit the building she followed the other bikes through the water but didn’t last long, and her trusty Attila conked out. In a normal situation in any other country you would have to wade through the phone to try and call a repair shop to pick it up, service it and get it up and running.

Luckily, as she looked around there were similar people jumping off and pushing their bikes through the water, she wasn’t alone. A few Vietnamesers had set up a business at the side of the road, ushering Donna off the bike..stripping it down..checking the brakes and getting it up and running again within minutes, all for the price of $2 without the hassle of bartering it down.

One thought on “Becoming a yes man – Driving in Saigon”