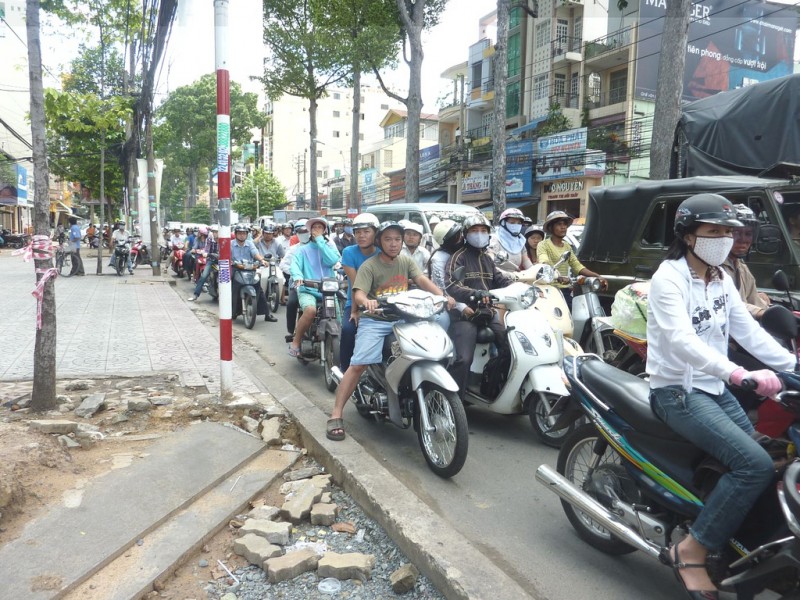 Saigon (officially known as Ho Chi Minh City) is Vietnam largest city with a population of around 8 million people and over 5 million motorbikes. Anyone that has visited this city will agree that it is crazy busy, making crossing the road a bit of a gauntlet and finding a quiet area even more difficult.

Strange as it might seem but Donna and I decided to settle amongst the madness for 4 months and teach English in Saigon. The original plan was to teach in Cambodia, but having enjoyed travelling down through Vietnam we decided to return and teach there instead. The decision was helped by the searing 40+ degree heat of Cambodia in April.

So what was a typical day like living and working in Vietnam? For the first while it was all a bit tiresome and overwhelming, but soon the madness all became normal and the city began to show its real charm. We also got to see a generous, warm side to the people that the average traveler wouldn’t normally get to see.

What did I do in a typical day? Well…here’s a breakdown…

One of the best things about being a “full time” teacher for a language school is that you usually only work 20-25 hours per week. The only downside is that the majority of these hours are usually in the evenings or weekends.

During the weekdays I had most of the day free because I didn’t usually start work until 5pm.

The only morning deadline I had was to wake up in time to dash across to Bobby Brewers before 11 to take advantage of the breakfast offer of Egg ‘n’ Toast and a free coffee. All of which came to the grand total of 55,000VND (approx £1.80).  This was when I would usually share a few jokes with the staff and catch up on Facebook and Twitter updates using the free WiFi .  The WiFi access in Vietnam would put any western country to shame as its available practically anywhere and always free.

After breakfast it was time to jump on a Xe Om (motorbike taxi, translated literally as motorbike hug) and head out to Star Fitness.  The journey usually took around 20 minutes and cost 60,000VND (approx £2.00) for the return journey. I would usually hide here, out of the midday sun for a couple of hours and do some cardio and weight training.  The facilities here were excellent and included use of the gym, pool, sauna and steam room.

After a quick pit stop in Yogurt Space for some frozen yogurt (big craze in Vietnam) it was time to gather my books and head down to the Internet cafe to prepare for the evenings classes.  The Internet cafe was usually and interesting experience in itself as the Vietnamese school kids seemed to flock there after school to play online games and chat with their friends on Yahoo messenger.  Lesson planning usually consisted of checking the book to see what the language and grammar focus was for that evening and looking up fun ways to make the lesson more interesting.  This often included making Bingo cards or looking up games related the particular language focus.

After preparation it was time to grab some food before class.  I would usually meet with Donna and we would head to one of the many restaurants or street stalls in District 1.  If the Vietnamese excel at one thing, it was definately cooking.  You always had plenty of choice and the western food they made was equally as good as the Vietnamese food.

After filling our belly we both high tailed it back to the hotel and changed for work.  We both jumped onto different motorbike taxis and headed off in to opposite ends of the city.  I worked out near the airport, a 15km journey that took 30 minutes by motorbike. The same journey would probably take well over an hour by taxi.

Once in school I would grab a quick coffee and a snack from the street stall outside school.  The friendly woman would usually smile and ask questions in Vietnamese and I would try and guess what she was trying to communicate back with her using the universal language of smiling, laughing and miming.

Class usually started in the same way, a quick casual conversation and jokes with the class followed by a warm up game and language review.  We would then work our way through 2 or 3 pages of the workbook before finishing up with a fun game or exercise, usually related to the language language or grammar that had been covered in the lesson.  The same formula would usually repeated for the second group of student in the evening class.  The students were usually fun and liked playing games and joking around.  Many of them were keen to practice their English as much as possible.

After class I would jump back on the motorbike taxi and head back home.  The school organised the motorbike taxi for me and it would only cost 70,000VND (approx £2.30) for the return journey.  Thanh the motorbike driver would normally wait outside the school for the 4 hours for me to finish. I’d sometimes bring him a coffee or snack during the breaks.  Something he seemed to appreciate while he waited.

I would usually stop and pick up a few Beer Saigon’s on the way and chill out watching TV for the rest of the evening.

And there you have it, typical day in my life living and working in Saigon, not so strange afterall.

One of the best things about Saigon and Vietnam in general was that there was never a day that would go past that you would see something that shocked or surprised you.  You were always guaranteed to see something that made you smile, whether it was a full size fridge, 1000 eggs strapped to the back of a motorbike or watching the kids in the internet cafe scream and bash the keyboard while playing some dance games in the internet cafe.  It is a place that I will always remember and look back on with fond memories.  I may even revisit the madness some day.

4 thoughts on “Working in Saigon – A day in the life”