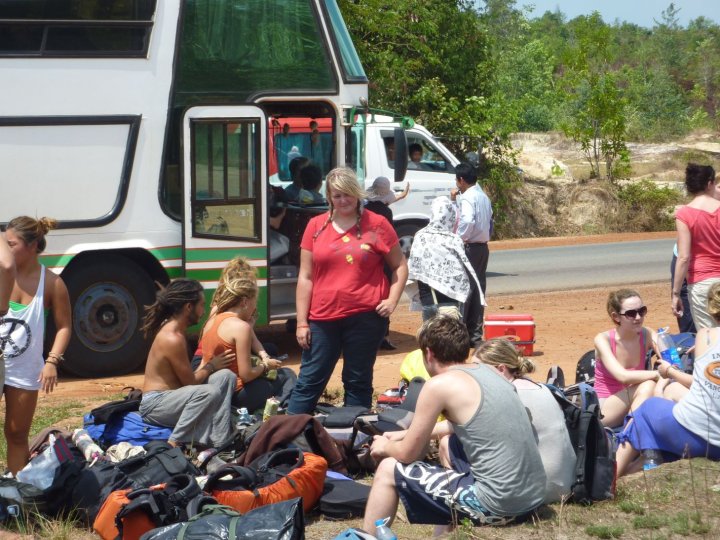 South East Asia is a big place but it’s incredibly easy to get from A to B using any number of ways – Flying, Buses, Jeeps, Taxi-shares, organised tours…the list goes on.  Anyone who has travelled in the region before will know that taking a bus is usually one of the most cost-effective options.  However the quality of the bus service varies vastly from country to country, this is something we have learned with each bus we stepped on.  With this in minds I thought I would write a few hints, tips and observations on bus travel in the region.

Thailand is probably one of the more developed countries in Southeast Asia and runs an excellent bus service throughout the country.  We used the government bus service on a number of long distance journeys and found them excellent.

They offer spacious seats and you even get snacks and drinks on some of the longer journeys.  They also work out considerably cheaper than most of the private tour operators.  The smaller local buses, although not as comfortable, are also a good option for the shorter trips.

You will see these so called buses everywhere throughout the region and you would be forgiven for thinking that they offer VIP service.  They don’t.  It means nothing.  If your lucky, they might have air-conditioning but offer little else.

They are usually just standard buses painted to look like they’ve just rolled out of Pimp My Ride.  They are sometimes the best/only option in developing countries like Laos or Cambodia as there are often no other bus services available.

This is especially true for bus travel within Laos.  Buses in Laos usually leave when they are ‘full’, but not full by western standards as we discovered when we were waiting on a bus from Vang Vieng to Vientiane. We arrived at 7 in the morning and were informed that the next ‘VIP’ bus would be leaving when it is full of passengers.  Not a problem, we thought, as we sat down to wait for more passengers to arrive.  Waiting on buses, trains etc. quickly becomes the norm in Southeast Asia.  The minutes turned into hours as we dozed off, waking up every now and again to check the passenger count.

Around 11.30 we were informed that we could now get on the bus.  As the passengers – a mix of mainly locals and a few foreigners – filed onto the bus each seat quickly became occupied. Looks like we would be leaving soon, or so I thought.  Not so.  Although the bus looked full to my untrained eyes, the bus company thought otherwise and proceeded to stow some cargo – in the form of what looked like sacks of rice and fertilizer – up the aisles of the bus.  After the cargo was in place some plastic stools were then placed up the aisles and more people arrived to take their seat for the journey.  Soon enough the bus was bursting at the seems, full of people, cargo and possibly even some live-stock.  In the places where there was no room for plastic stools people resorted to sitting on the steps or on top of the fertilizer.

It seemed the bus was now full up according to Laotian standards and we finally set off on out 6-7 hour journey to Vientiane, not without the odd pit-stop in the middle of the Laos countryside for some refreshments.  Personal space is a non-existent notion in Laos and the locals will happily lean on your shoulder to rest their head or sleep, as Donna found out.  She had a child sitting on a plastic stool beside her in the aisle, sleeping on her shoulder for the duration of the trip.

Location is key to a more comfortable journey

The majority of our bus journeys took place as we made our way down through Vietnam, this is where we learned that the Vietnamese are no stranger to using their horns and will use it at every possible opportunity.  Therefore it is less than ideal if you are near the front of a bus with a honk happy driver.  Trust me, even the most patient people in the world will have their patience tried on one of these buses.  These aren’t your standard horns either, they sound like a fog horn has been ripped off a cargo ship and has been installed on the inside of the bus.  If your patience isn’t frayed by the end of a 10 hour bus journey, your ears certainly will be.

We find that the best position is somewhere between the middle and back of the bus, preferably at an emergency exit, for those precious extra few millimeters of leg room.  It is also best to try and avoid the very back seats of the bus.  They may look appealing when the bus has only a handful of passengers on board, but trust me, the bus may set off with just a few passengers but it will be guaranteed to fill up as it stops off in every hole in the hedge to pick up more passengers.  Before you know it the bus will be full up and you are wedged in between 4 other passengers, as the passenger to your left is snores in your ear and the one on your right is using your shoulder as a head rest drooling down your arm.

When booking a bus ticket, take everything you’ve been told with a pinch of salt.  If you are told that the bus has a toilet, don’t get your hopes up.  Many buses have toilets but an equal amount don’t (or at least ones that work).  This is sometimes not necessarily a bad thing because a well used toilet in the searing heat of Southeast Asia doesn’t mix well.  Unless you’re ill or have the runs, toilets aren’t a necessity because the bus usually stops for a rest break every 2-3 hours anyway.

Always carry toilet roll (doesn’t just apply for bus journeys)
You never know when you are going to be caught short.  You’ll be sampling a vast range of Asian delights on your travels but not all of them are going have the desired effect on your guts.  The last thing you want is a bout of the belly bad’s in the middle of a 15 hour bus journey and not having any toilet roll.  Rarely do public toilets in Southeast Asia have toilet roll so try and get into the habit of carrying it everywhere.  Its bad enough trying to figure out a squat toilet, never mind trying to figure out a squat toilet and then realising you have no toilet roll.

The infamous sleeper buses of Southeast Asia.  Anyone planning any sort of backpacking trip around Southeast Asia will have the privilege of travelling on one of these types of buses at some point or another.  Basically these are standard size coaches with small beds in them instead of seats.  Sounds great, you might think, not so.  The beds are definitely Asian proportioned.  The beds are too narrow and too short, by the time you wedge yourself into one you feel a bit like a sardine.  Between drivers heavy use of the horn, bumpy, bendy roads and locals using your bunk as a personal foot/arm rest, you’ll be lucky if you get any more than a couple of hours of unbroken sleep.

Over time I’ve discovered that people deal with these journeys in different ways, some talking copious amounts of alcohol, sleeping tablets and even Valium to help them sleep while others just relied on their iPods, earplugs, books or the trusty old sleep mask.  I have to admit, I found my iPod priceless on these occasions.  A book only helped with part of the journey as the bus driver, more often than not, enforces a light policy shortly into the journey, forcing the bus into complete darkness.

The best advice I can offer for sleeper buses is try to score a top bunk near the back of the bus (away from the horn), but not near the toilet either.  The reason for the top bunk is because the bus tends to pickup locals along the way who sleep up along the aisles.  As I found out, they aren’t shy at making themselves at home and won’t think twice about using your small bunk as a foot or arm rest.  I turned round on a number of occasions and had a foot in my face or found myself being spooned by a total stranger sleeping in the aisle beside me.

I’m a little bit hesitant to go into too much detail about this one just in-case my parents are reading so I’ll just gloss over the issue somewhat and perhaps dedicate a future blog to the incident in question.

Road rules in Asia, especially the more developing countries, are somewhat lax to say the least.  Drivers are usually forced to work long hours for very little money and as a result accidents do occur surprisingly frequently, most people I’ve spoken to on my travels all have a horror story related to a breakdown or an accident.  Fortunately most accidents aren’t serious but do, however, cause several hours of delays to your trip.  My best advice for an event like this is to take the laid back approach and ensure your iPod is fully charged before you start any bus journey.  If a more serious accident happens try and remain as calm as possible and let the authorities deal with the situation.  Bus drivers also have a tendancy to do a runner in an event like this meaning that the delay can usually be even longer while a new bus and driver is sourced.

Nobody likes long bus journeys but it is important to look at the journey as being part of the experience.  If you dread every long bus journey its only going to make things worse.  Some of the most interesting stories and fun times we have had are from bus journey or have taken place when trying to get from point A – B.   Bus journeys are also one of the best ways to view the countryside of the place you are travelling.  I’ll never forget the stunning unspoilt views of hills and mountains that I had while standing at a Urinal/Wall in the middle of the Laos countryside.  Equally so, I’ll also never forget trying to have a pee while 3 goats stood watching me.

Travelling isn’t just about the final desintation, it’s also about the journey you took to get there.

One thought on “Bus Travel in Asia – Top Tips”