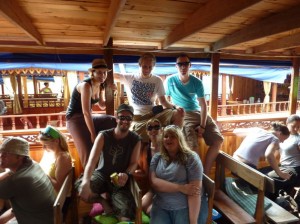 Moving from one country to another can be quite a hassle.

We always pictured crossing the border to have high security, uniformed officials and sniffer dogs at the ready to give us foreigners the once over before entering the country.

The ‘ordeal’ from leaving Thailand and getting to our first stop in Laos, (Luang Prabang) was one that will never be forgotten!

Best way to explain it is to tell you first what was supposed to happen. We would get the bus to Chiang Khong in Thailand, cross a small river and go through immigration and enter Laos. The next day we would get the slowboat to Pak Beng, stay the night then the next morning get the boat to Luang Prabang.

What really happened: We bumped into Joanne and George on the bus to Chiang Khong who also bumped into Chris (a guy that used to work in Tesco) and his girlfriend Kitty. So all 6 of us crossed the river into Laos and got through immigration (a very lax affair with one of the employees wee kid stamping our passports for a bit of fun).

The next morning we all met at the slowboat port. These boats are infamous on travel websites for being extremely uncomfortable so it was recommended we get their early and buy cushions for the also infamous asian proportioned wooden seats which defo aren’t made for anyone with junk in the trunk.

So we get down there a few hours early desperate to get good seats..so all 6 of us get a few benches and wait til we set off sail for our slowboat experience of a lifetime.

An hour and half later after the boat was supposed to leave we were still sitting (on our relatively sore bums) waiting to go. Of course some backpackers weren’t as organised as we were and turned up late only to be shown to the next boat which had fancy soft seats with backs on them which looked like they were ripped out of an airplane. Rage – the early bird catches the shit seats, that’s for sure!

Once we finally got on the way we got the craic going, whipped out the vodka and beers along with the ipod and speakers and started making party.

Cruising down the Mekong was lovely, taking in the scenery, the locals out fishing and kids shouting and waving over from the beach. About four and half hours later (and slightly steaming) the boat pulled over to a beach with locals. It had stopped off along the way already so we just assumed it was getting more fuel for the engine.

We waved out at the locals fishing and washing in the water, as some of them jumped behind rocks to cover up. Soon enough word spread round the boats that we were stopping on this sandbank for the night and we would not being going to Pak Bang because the water levels were too low.

Rumours were flying high as speedboat touts scooted up beside the boats offering to take us to Pak Beng for a small fee of 70 quid sterling! No-one was wanting to pay that rip off price so we were given two options, a) to sleep on the slowboat for the night or b) to walk to the next village.

We chose the second option. Hiking up the sandbanks with all your luggage when you are drunk is not good but we trekked to the next village where the locals had set up food stalls with plastic covers for us to sleep and with a huge speaker and music.

Turned out to be a pretty good night as we got well fed and were well entertained by the local kids coming down to have a look at us. Kitty took to teaching them all how to count, a task they found fascinating and she taught them some songs like head, shoulders knees and toes which they loved. Some of the mothers were joining in and made sure the kids were paying attention to what was going on. It was one of those moments you couldn’t forget.

After midnight most people tried to settle down to get some sleep. Believe it or not, being at the sea is extremely cold and both of us didn’t have a sleeping bag or pillow between us. I made do with a thin British Airways blanket I had stolen from the plane and Donna used my towel to keep warm. I’ve never been so freezing in my life.

Finally once morning arrived we were able to get back onto the boat to bring us to Luang Prabang. The mood of the boat seemed pretty subdued for most of the morning until it picked up in the afternoon and was ready for my first beer of the day!

We played some Jack Change It and tried to sleep for parts of the day. The best part of the day was sailing into LP and seeing the sunset on the Mekong, was pretty nice.

All in all, an experience at the time you think is hell but laugh about a couple of days later! Especially Joanne spooning Donna for heat and George leaving the locals a present in the sand.