Skip to content
borebags > Random musings > One year of travels 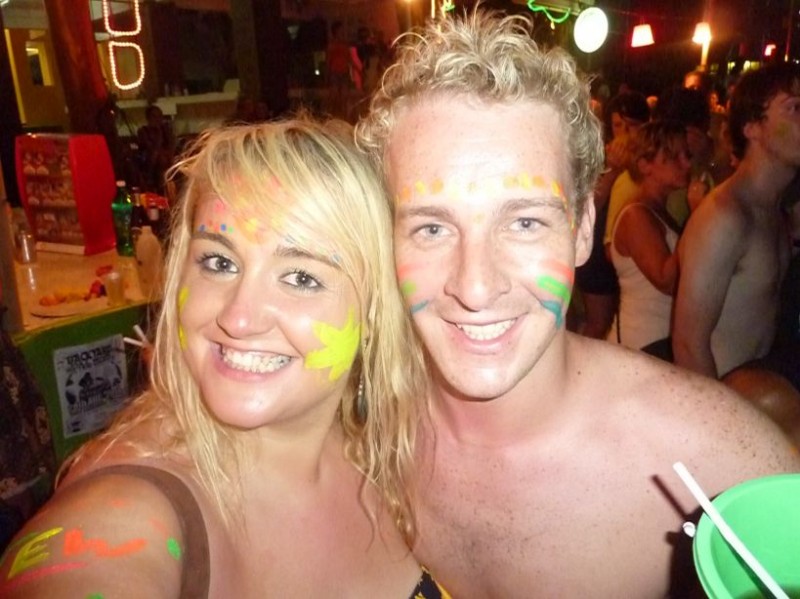 The day has finally arrived.

We’ve been on the road for one full year today. Both of us want to reflect on some of our favourite bits we might have missed out on during our travels and our hopes for what’s to come in 2011.

From the first sip of Magners at Belfast City Airport waiting to board the first plane of our big adventure to the 1.5 ltr of water I’m drinking typing this on New Zealand’s Interisland ferry, a lot has happened in the past year!

Sitting in the bar excited to kick-start the trip, we both made a promise to at least last until the summer…meaning we could both go home with our heads held high and not be embarrassed about returning home earlier than planned.

Our original itinerary from 16th January had us staying in S.E Asia for 7 weeks…covering 4 countries in that time frame…going to Australia to work for a few months, continuing to travel New Zealand for one month and then hopping over to South America to round off our trip at Christmas and be home for 15th January.

As it stands today, we’re a bit behind on the original plans as we currently are spending the second half of January in the North Island of New Zealand. What changed from 7 weeks in S.E Asia turned into 8 months of travelling the countries and spending 4 months teaching English in Vietnam. Loving life there.. it was tough saying goodbye to the place we spent the majority of our trip but we moved onto Australia…where our plans changed even more. With jobs in Brisbane…but time running out, we decided to keep our original NZ plans….drop the ticket to S.A and home…and return to OZ to work instead of catching that BA flight back to Belfast. In our usual style we don’t know what the future holds but I’m sure we’ll make our minds up as we go along. Why change the habit of a lifetime eh?

As for 2010… It’s quite hard to sum up a year of culture shock, growing up, near death experiences into one blog but we both have our favourite bits.

I have my own personal memories that will always stick in my head and also have the funny stories we repeat when we’re chatting to new people. One thing I’ve learned over the past year which could be a metaphor for life I suppose is…it may seem like it’s the worst possible situation at the time….but those are the things that make the best stories!!

It’s hard to pick a favourite place out of all the cities, villages, townships, rivers we’ve visited. I’ve got my favourites in each country I suppose and I pick them purely because of the experiences there.  For example, Hue in Vietnam is not the biggest tourist destination in the country. It doesn’t have the beautiful beaches of Nha Trang or the busy city life of Saigon but if we didn’t stop off at this pitstop we never would have had the story of “Fuck Liar” – one of my faves!! It’s the small places you wouldn’t think twice about bypassing that make the best memories sometimes. This kind of sums up what S.E Asia is all about…which is what I loved about it.

I remember sitting in Phi Phi and ringing home on Sunday night – the week before we left to go to Australia. I remember telling my mam it was the last time I’d be chatting to her in Asia.. and I felt a wee bit sad about it. Leaving paradise in the Islands was pretty hard but it was funny when we did arrive in Cairns the week after and Gareth took his flip flops off outside a dive shop before going in to ask about trips. Stupid things like that will always make me giggle!

Life in Oz has been great in a different way… it’s a complete reverse U-Turn to what we knew in Asia but the lifestyle is much more relaxed with lots to do at the weekend and we get to earn big bucks while doing it. The BBQs….weather (when it’s not flooding) and things to do in the city are things we miss out on in Belfast…which makes working not so bad.

Rounding off the year in New Zealand has been a pleasant surprise. I didn’t know what to expect but I’m well impressed what I’ve seen so far. Being on the road again after a short stint of working is great… It’s a brilliant country to drive around and camp in…something we’d never really get the opportunity to do anywhere else so it has been great. Not being into the countryside really I’ve changed my opinion just driving through the mountain ranges and crystal blue rivers and lakes camping along the way which has been great craic.

As a new year begins…so does a new adventure with who knows what 2011 has in store for both of us. I’m sure it will match the excitement and thrills of 2010.

What an incredible year it has been.  We’ve experienced so much and have countless stories to bore people with when we do finally make it home. From the moment we stepped on the plane in Belfast its been an absolute blast.  The initial culture shock in Hong Kong was nothing compared to when we arrived in Bangkok, then just as we had got used to Thai culture we were thrown into Laos, and possibly the biggest culture shock of all…Vietnam.  It’s very hard to sum up the highlights of the trip as there have been so many but I’ll touch on a few of my personal highlights so far.

Bangkok the 1st, 2nd, 3rd and (hopefully not the final) 4th visit

Bangkok is a crazy, crazy place for travellers that are new to Southeast Asia. It’s a real melting pot of culture, sleaze, sex tourists and crazy traffic.  The first time we arrived here we had our guard up and were worried about getting mugged, murdered, robbed or scammed.  Luckily, we negotiated at the airport and arrived at the Suk 11 hostel without encountering any of the above.  After initially settling in we plucked up the courage to venture out onto the streets and into the madness.  It was mental and left us feeling drained so we soon retreated back into the hostel for the rest of the evening.  We couldn’t wait to get out of the city first time round but this soon changed on the subsequent transit visits.  Bangkok is a city that grows on you and by the 4th visit I was loving it.

This is a classic example of how a seemingly bad experience at the time can turn into a fond memory.

Despite being stuck in the middle of nowhere, the Laotian people really knew how to make the best of a bad situation.  They set up camp, complete with music and food stalls, not forgetting the alcohol.  It had a real party vibe.

Exploring the ancient temples of Angkor in Cambodia

The Indiana Jones in me has always wanted to visit here but after suffering from Temple fatigue throughout Northern Thailand and Laos I was worried that I might be disappointed.  I need not have worried because it was incredible.

Only in Cambodia are you given pretty much free reign to explore anywhere in the sprawling complex. As you can see from the photograph, I roamed every nook and cranny of the dilapidated temples. The Lara Croft in me took over and I was like a kid in a candy shop. I even got to see where they filmed the Tomb Raider movies at the Ta Prohm temples. It was amazing to see the trees overgrown on the ancient landmarks. My favourite has to be the Bayon temple…with a number of faces etched into the stone walls. A real beauty.

Check out my photo blog for some of the highlights of the visit.

Living and working in Saigon, Vietnam

Vietnam was always a major point of interest for me when we were first planning the trip and I was looking forward to visiting and travelling through this country.  Little did I know that I would be living and working there for 4 months.  Ho Chi Minh City – with a huge population of over 7 million people – was the city of choice for our 4 month stint.  After an initial shaky start with finding  jobs and getting used to a city with such a huge population we began to feel at home there and really began to see a whole different side to the Vietnamese people.  When it was time to leave we were both genuinely sad to be leaving our second home behind.

Check out my Day in the Life blog for a sample of what it was like living there.

A month of madness on ‘The Islands’ of Thailand

After our 4 months teaching in Vietnam we were both ready for some partying and relaxing and the Islands of Southern Thailand was just the ticket.  Thailand really is something special.  Our trip started back in Bangkok for the forth time with some vodka buckets on Khao San Road then on to a beachfront bungalow on Koh Tao for some advanced scuba diving. Next stop was the equally stunning (but a bit more touristy) island of Koh Samui before skipping across to the west coast to Phuket.  After Phuket we made our way back across to the east coast for the full moon party on Koh Phangan.  By this stage we were both suffering a bit from paradise island fatigue (and mega hangovers) but ventured back across to the west coast again to spend the last few days of our Asian adventure on Koh Phi Phi.  Koh Phi Phi was simply incredible and had a laid back, relaxed vibe to it.  It was the perfect way to finish up that leg of the trip.  Even now, 4 months on, we are still dreaming of going back to the land of smiles.

This was also high on my list of priorities when we were first planning the trip.  Having gained my Advanced PADI course while in Koh Tao I was keen to do it properly.  This is the first and only time on the trip (so far) where I really blew the budget.  I opted for a 5 day live aboard trip that took us to the outer, more pristine Barrier Reef.  This included a visit to the ‘Cod Hole’ where we were able to dive with and witness giant Potato Head Cod feed.  The weather conditions also allowed us to dive Osprey Reef with a 1000 metre drop-off, vast quantities of marine life and hundred of silver tipped reef sharks up close and personal.  We were also able to witness the sharks in a feeding frenzy as they tucked into Tuna heads.

That’s just a small sample of events and memories that have made up an incredible year of travels.  Who knows what 2011 will have to offer but we’re looking forward to finding out.

One thought on “One year of travels”