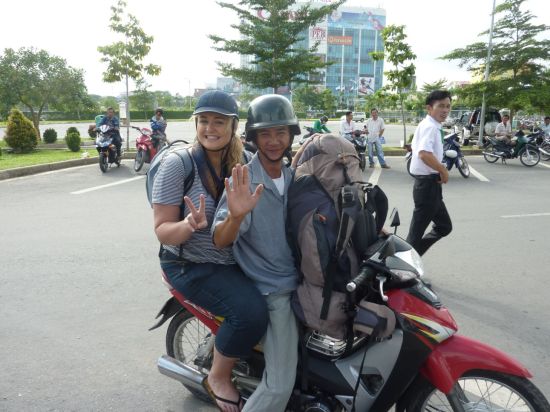 This is wee Buddha bum. All the kids in Vietnam were cute (although after teaching them for four months I can also say slightly annoying at times too) but Buddha is one of my favourites. Everytime he ran into the water his shorts would fall down round his ankles… giving us a different type of full moon…something I giggled at the whole day.

The joys of the sleeper bus. This picture was taken while I was conked out on our journey to Mui Ne. A rare occasion that we got a sleeper bus during the day… I took advantage and had a good kip with the bally blanket wrapped me for good measure while G posed to make sure he got the best angle of himself in the photo. I’m a gorgeous sleeper, right? Powerful!

It wouldn’t be a best pics blog without including one of the numerous sand dune pics we took in Vietnam. Much to everyone’s entertainment, and probably the first time of the trip…G and everyone else got plenty of giggles from my facial expressions rather than the activity itself. Priceless.

This really captures the madness of day-to-day travel in Saigon. With 5 million motorbikes on the road in this huge city, hopping on and off these things becomes the norm. This is us having a wee chat while stopped at the traffic lights. Totally alien now I think back.

Me and my motorbike man. He was my personal driver the whole time I stayed in Saigon and he liked me so much he even bought me my own special helmet…as modelled in the photo. This was taken on the last day when him and his mate brought us to the aiport to leave. Yes, we did drive through the mad traffic with my backpack inbetween his legs and I did fear for my life a few times when he couldn’t see over it. But alas we made it in one piece.